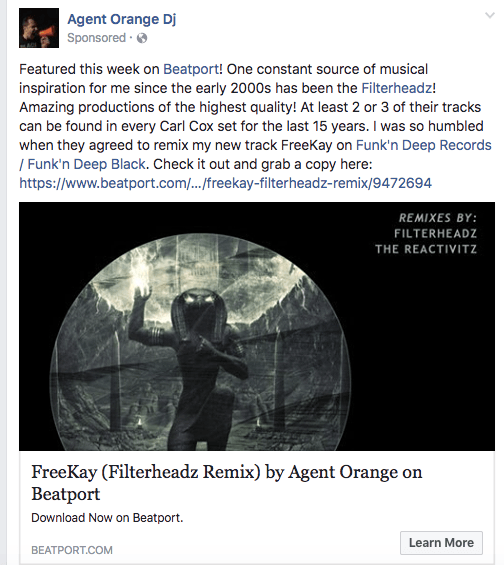 a primer on Facebook ads for DJs and producers

The Basics of Facebook Ads for DJs and Producers

If you build a better mouse trap the world isn't going to race to your door step.  They are more likely to yawn or say "so what."

So when it comes to building an audience, just putting your stuff out there isn't going to move the needle.  More than likely you'll get a trickle of likes and follows.

You have to promote yourself.

There's basically 2 ways.  Paid and "organic."  Organic is nice but it takes time, it's also something the underground community prides itself on.  The brick by brick building of a brand, word of mouth and so on.  We music makers tend to view advertising as "yucky" but this is a limiting belief.  We know some artist have bought fans which come from "bot farms," but don't disregard all advertising because of this foolishness.

10 years ago tit was easy to get a lot of growth just by putting stuff out there.   Today things have evolved - you can't only rely on "organic" growth.  It's going to be slow and frustrating unless you get lucky.  So let's make our own luck.

What most people think of as promotion is really public relations.  Working with influencers, posting and sharing on social this is all PR.  It's creating a favorable image by communicating with the masses .  This is great but it's hard to measure and takes lots of time.  Good to do but you can't have all your eggs in PR.

Typically "PR" campaigns involve lots of manual labor with no guarantee of a pay off, such as a favorable mention in the press that would result in bookings or record sales. By manual labor I mean cultivating a list of influencers or people in the press and then doing direct out reach.  Or submitting your music to popular blogs.

Personal selling is the sales hustle - think "buy my mix CD." You can do that but you need an audience first.

Direct marketing - this is selling directly to the masses without a distributor, like you selling your music direct to fans without Beatport or digital distribution.

Advertising- this is how you build an audience. More on that in a second.

PR. This is about communicating with the public and building up a good brand. Posting on social is what we're most familiar with. Or maybe you run a Facebook group to establish yourself as an expert or taste maker - good stuff but time consuming with no immediate pay off in terms of bookings, music sales or even new rampage likes. There's press releases too but that's another subject. It's still another thing that takes time and money with no immediate result.

Back to advertising. This is how you grow because Facebook and many big media sites are pay to play.  If you are active on social, you have to put some money behind your activity to fuel growth - and it has to be done in a strategic way because otherwise you'll waste money.

Even DJs have to advertise to reach high percentages of their audiences. Paid campaigns also allow super specific targeting options. Like a European based DJ could run an ad just to her US fans that like Output if she want to laser in on a specific audience for an upcoming gig.

When you advertise consider that people are in 3 basic stages.

Facebook offers you the ability to create new campaigns based on these 3 stages.

In addition you want to reach the right audience. This is a key part of campaign planning. Audience, message, results.  An audience could be people that like the same things you do - fans of DJs you like, like websites such as Resident Advisor, or Attack Magazine, an audience could be people who already like your page, friends of people who like your page, people who visited your website in the past 30 days.  These are all examples of audiences.

The smart approach to use when resources are limited are to reach people at the consideration or decision making stages.

So if you're a new producer you want to reach other DJs who not only play your genre but also like things like Beatport or track source.

These are your buyers. The more general clubber or festival goer may spend little to nothing buying music.

Driving to beatport is not really advised because you can't measure the result.

You measure results by placing the Facebook pixel across your website, so you should have a website. It's not that hard to do a basic one.

If I was building an audience from scratch, I'd probably do things like:

Upload a video of an original track to Facebook while building an audience of people who watched at least 50% if it's a longer video say 2 minutes or more.

Use retargeting ads to promote something to these people interested enough to watch my stuff for a decent amount of time.

To get this right, you need to have some tracks to give away or sell and your own website.

For a general awareness play it's not a bad idea to run an ad the way Agent Orange has, but in the long run ads like these are not sustainable because you can only track link clicks.  It's impossible for him to measure sales on beatport back to clicks spend on Facebook.

This is just a primer on using paid Facebook ads, remember that the best thing you can do is to be out supporting other parties and meeting people.  But again, this is like PR, you just don't know if each time you go out you're going to make a solid connection.

Consider that for the cost of a couple nights out you can buy web hosting for a year and pay for a basic website theme.  For a few bucks a day here and there you can begin advertising your stuff to build an audience.

Let me know your questions and comments because I could go real deep on this if you like.