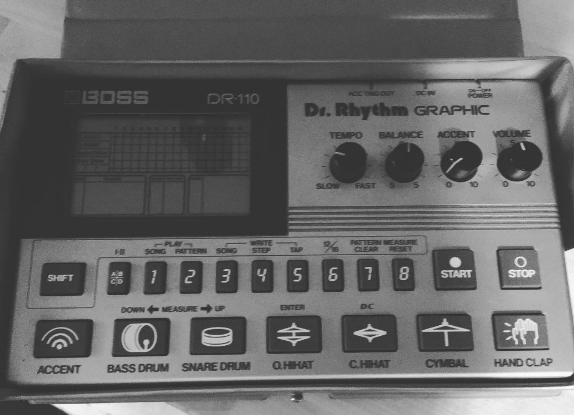 Comments About the Sounds:
It sounds like a less grungy, brighter TR-606, with fantastic handclap sounds. Ticky Roland noise snare, your roland hissy analog hihats, ride-cymbal's bell-like, like the 606s, and the Bass drum... well, if I make a successful mod I'll post it. Oh, did I mention the handclaps are the best?! Not real tunable. . . But I'll be working on making some mods once I get my spare (guinea pig) DR-110."

How did I get this Drum Machine?

Hopefully you're like me and have a handful of cool older cousins.  My cousin Mike is an awesome dude.  Super duper cool. Runs a local business, plays in a band, always up for a cigar or whiskey.  Back in the day he got cast as an extra in the Sopranos and so on.

The boss drum machine came out in the 80s and my cousin Mike was one part of the intended audience.  Mike plays guitar and wants to jam to a drummer so Roland made these drum machines.  Well, you know how history goes. They were terrible at their original purpose as they sounded no where close to rock and roll drums and they made there way to the second hand market and became the stuff of flea markets.  Then us DJs and electronic music heads got a hold of them and you know what happened from there.  One day a long time ago at Mike's house he was like "Here take this thing, because I never use it but you might like it."

Anyhow it's a cool but of kit.  Very very simple, theres like 5 sounds so I recorded them with my UAD Apollo through the unison pre-amps and assembled some basic loops. I don't know what project couldn't use the cymbals, claps, and snares.  What's nice is that it comes in it's own case, so many are well kept. You grab one for a few hundred but instead, I recorded and you can grab the samples here.  Enjoy.