Hitting a plateau, frustration, the idea that the grass is greener, the yearning for a new shiny object - these are NOT good reasons to switch but are distractions.  And when you fall into these mindsets, marketing hype from software companies starts resonating with you.

We've all been there.

And it applies to gear as well.

I'm not faulting software companies, like any business they need to market their product.

The underlying message nearly 100% of the time is that if you adopt this software magical things will happen.

It will be easer.

It will be better.

"You'll be on an industry standard"

They are true IF you learn them and put in the work.

And this takes time.

Time that could be spent developing your music, your ear, your song structure, or mixing.

At the end of the day, software will not make or break a record.  It's merely a tool to get the job done.

When you know it's nothing more than that, you won't get distracted by marketing hype, or go down a costly road of frustration.

Because if you adopt a new technology, you have to learn it.

Pick the DAW or music production software that's right for you and stick with it.

I'm not saying don't ever make a switch, but do it with healthy skepticism and planning.

If you don't have any tracks out or signed you have bigger fish to fry than switching DAWs.

If you have gotten to that point, ask yourself if a new DAW is what you really need right now to get to the next level.

The answer is probably no.

Recently, I bought into the marketing from Harrison, about their DAW mixbus.

I liked that it's super-affordable, analog based, and has a limited set of features, so I pulled the trigger on a $39 sale of version 3.0.

And you know what happened, it's been collecting dust.

It does sound nice, it's just that when I get to the point of fine tuning the arrangement of a track, then adding some automations and giving it that last bit of mixing polish....I just didn't know how to do that stuff in Mixbus.

And the time to learn something new didn't justify the perceived benefits.

Here's an example of the opposite.

Back when I first got into production I plunked down $2,000 for a near mint Korg Triton keyboard. This was the bomb back in the day, however it was more for pop, hip hop, RnB, perhaps more mainstream dance.

I did get a lot of use out of it...but it wasn't the best fit because I just didn't have enough experience to know better when I originally bought it.

I'm also not a keyboard player.  I've dabbled a bit, but I'm not really passionate about it.

This was before you could quantize notes as you were playing so inputting music with a keyboard was a tad harder.

And if you wanted to play chords, you had to know some scales and theory, unlike today. Sure theory helps, because you can add in notes that are not typical, or voice chords differently but today you can play triads, 7ths...all with the push of a button without having to worry about hitting the wrong note.

My point is that a couple years later I dabbled with an Akai MPC 2000.  I loved it and took to it quickly.  I still love the idea of crate digging, sampling sounds and making beats.

I do that with Native Instruments Maschine.

My point is that producing from a keyboard is not the way to go for me. I'm more a drum pad guy.

So it makes sense for me to work that way.

So I stick with Maschine for dance music production.

There are times when I feel like doing something new..but it's better for me to channel that into learning my existing stuff more deeply.

If you mainly use a DAW to mix and arrange then stick to that DAW.

If you need something to Jam then perhaps look at Ableton.

I mainly use Ableton Live to arrange and mix.  So I'm not leaving anytime soon because it's good enough for that and other things. Remember I don't need all the functionality that someone who records and mixes bands would.

IF you are on a DAW and it feels kinda rigid and not as creative as you'd like then maybe look to Ableton, Fruity Loops, or Reason.

At the end of the day DAWs/ or music production software programs fall into 2 camps.

If you're in the right camp, then don't switch.

Because at the end of the day people are making hits on all the different platforms and again it's not software that will make or break a record.

The things that matter are your sound selections, hooks and music riffs, mixing, arrangement.

Basic, but not easy.

And because it's the MUSIC that makes a track, I focus on that - NOT learning every single feature in Ableton Live or Maschine.

In Ableton I know about 3-4 keyboard short cuts.

I pretty much use it to finesse the arrangement and final mix of a track.

Now if you're in the business of recording and mixing clients THEN you need to get much more advanced as a user of a DAW/production software.  Why? Because time is money and most of the people you'll work with in the beginning will suck and may not be tolerable to listen to for a while. So taking too long to get their project done well will hurt your ROI and ears.

To wrap up, until you have a handful of tracks signed all you need to do with your DAW is record, edit, arrange and mix your music.  You don't to be an advanced user of a DAW to do this.

That's all for now. 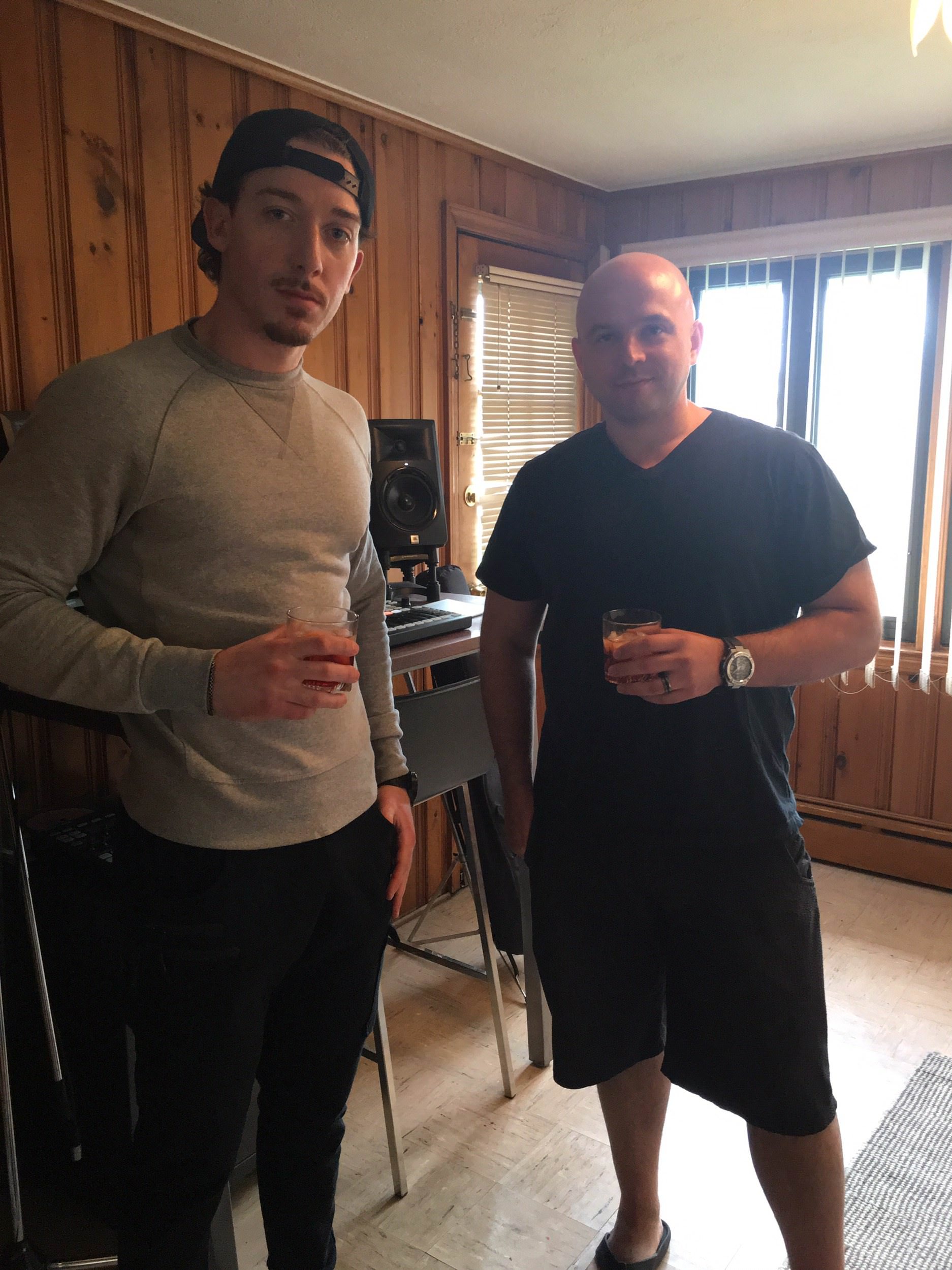 Getting down w Maschine Jam

Anthony (on the left) is a subscriber and also bought my paid course. He happens to live 30 minutes away so he came down to kick it about Native Instruments Maschine Jam, since he recently grabbed one.

We covered the basics, as well as cool features like the variation engine that gives patterns a more human feel.  Also made some loops and exported to Ableton.

We finished right around 5 pm which was the perfect time for a cocktail.  Ant saw a bottle of Compari on my shelf so it was Negroni's all around. 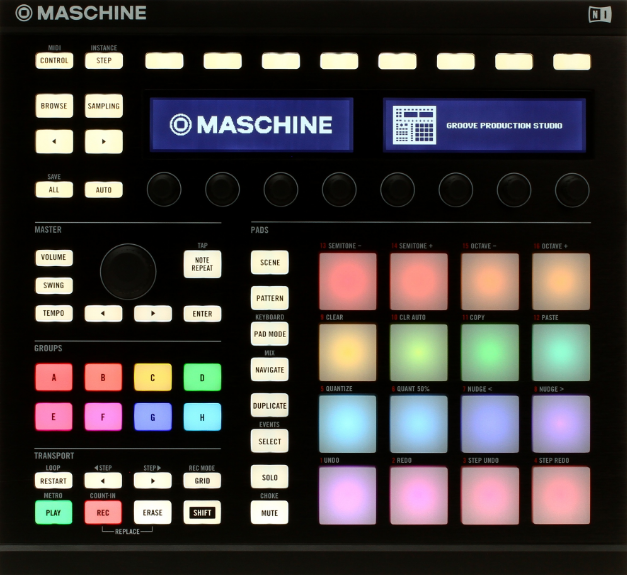 OK so I'm not here to endorse Mashine, yes I'm a fan but no reason to repeat what CVS said above in his post.  The kicker for me, is what "Albert Candy" wrote about the swing/groove.

And CVS relying saying he didn't even know what it is.

I found it kind of amazing that Barclay didn't know what it is.  He's got some soul so it's entirely feasible that however he programs drums already has enough swing and groove built it.

I love examples of how you can be great but not need to know what every bell and whistle does, be it Maschine, Ableton, Reason, Synths etc.

PS here's a direct link to the post if you want to grab some pop corn and check the comments.